The AS 332 aircraft is a medium-sized helicopter widely used in all branches of the Brazilian Armed Forces and by civil transport, including offshore operations that need to carry cargo and passengers to offshore oil exploration platforms. 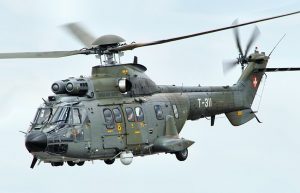 This rotary-wing group aircraft is much more robust than the others, as it has a very reinforced structure, making it more resistant to accidents. It is equipped with two very powerful engines, making its top speed 325 km/h, cruising speed 250 km/h and a reachover than 850 km/h.

The efficiency of this helicopter is something that deserves to be highlighted, as it can carry loads of up to 4.5 tons. In the 1980s, the production of the AS 332 has increased significantly, both in civil and military versions, and in the 1990s, a new model was produced to meet military needs, which has turned this model into an even more efficient aircraft.

The AS 332 was designed with six fuel tanks, equipped with an impact resistant system and an automatic fire detection and extinguishing system. The landing gear of this helicopter is retractable, that is, it is the one that can be retracted inside the aircraft, reducing the aerodynamic drag generated by the air resistance. It is also worth noting that this component was developed to absorb impacts in case of emergency landings.

The main rotor has four blades very wide,and the tail rotor has five blades. In the military version, the doors of this helicopter are sliding and very wide, which facilitates and speeds up the quick entry and exit of the crew and passengers. In one of its versions, the AS 332 has a GPS navigation system, an early impact warning system and night vision goggles. The naval version, on the other hand, features anti-corrosion protection, folding tail and systems that provide guidance for landing on decks.

It can be equipped with missiles, in case it is used in anti-submarine combat. From the 1980s until today, several aircraft of this model have been developed. The AS 332 is widely used in Brazil, in civil aviation, to transport employees to oil platforms, and to transport the president of the republic too. So, if you like aviation subjects and want to learn a lot more about this content, follow Secaleap!